While the unbounded freedom of conceptual art is the empty kernel at the core of our aesthetic era, much art nonetheless still makes its point more effectively in what it does than in what it says. And it seems no coincidence that France, the nation that formulated sadism, the most perfected practical realization of modern solipsism (as well as other, lesser political and cultural revolutions), also gave us Le Dernier Cri (in French, “The Last Scream”). Le Dernier Cri is a printmaking collaborative, begun in Marseilles in 1990 by then-couple Pakito Bolino and Caroline Sury, that has printed mountains of eye-popping (or, more properly, eye-gouging) work by artists from Europe, the U.S. and Japan. Perversion of all sorts is rendered impeccably on sumptuously beautiful matrices, almost choking the viewer with a dazzling fecundity of bodily expulsions and amputations, presented in profuse silkscreened colors and pristine textures.

Looking for meaning in this work is basically pointless—in the way that a severed penis vomiting dead babies kind of is what it is. The weight of this work is not in its scatology, but in its commitment to itself. This artwork shares with Chicago’s “Hairy Who” Imagists, and descendants like Tony Fitzpatrick and Jim Lutes, a veneration for the repressed-sexual-predator compulsiveness of “outsider” artists like Henry Darger. But in their vicious symmetry of intent and execution, the prints at The Hills are more enjoyable than most work in the Chicago tradition, which comes across frequently as just trippy, busy illustration. While there are memorable and monumental as well as overblown and gratuitous works from both Le Dernier Cri and Chicago’s faux-naifs, the icy-cold apocalyptic bloodthirst expressed in this show seeps out in every aspect, every formal decision and technical trick, like the smell of a rotting rat carcass in an otherwise sterile surgery ward. (Bert Stabler) 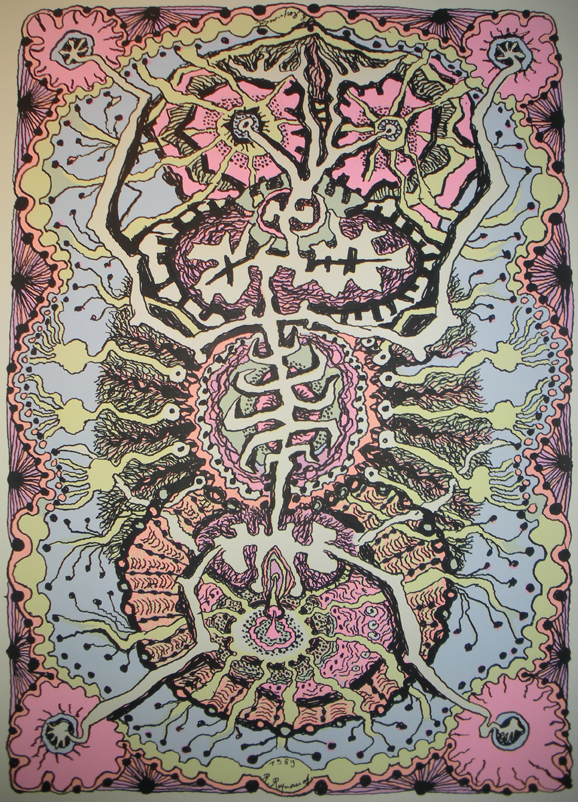