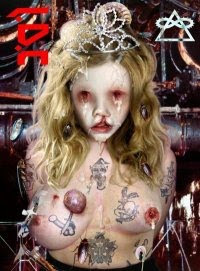 The mental discharge of Le Dernier Cri
‘Life Art’, is what studio Le Dernier Cri calls the radical visuals it unleashes onto the world. Known for its colourful silk-screened books and prints, the French publisher recently released a DVD called Savage Religion. Together with a collection of prints, comics and books it is available at the Amsterdam gallery Illuseum, currently exhibiting artists connected to Le Dernier Cri (which translates as either ‘latest fashion’ or ‘last cry’).

‘It’s the power of the artists to show all the human obsessions’, says Pakito Bolino, who runs the Marseille based studio .

With his manipulated photography, Fredox is the odd man out among the Le Dernier Cri artists, who mostly use drawing as a means of expression. ‘In this graphic art the line is really important’, says Bolino. ‘We started publishing underground comics, but soon the graphic style of comics became more important than the story. I think one picture can tell more than a whole book. For me, the energy inside the drawings is more akin to noise music--it’s noise art’.

Bolino works with artists all over the world. In the studio he does most of the silk-screening and the colouring, which explains the coherence in all the works. In the past decade he released seven comic-style anthologies called Hôpital Brut (‘crude hospital’). ‘This is like a mental institution with crazy artists inside’, says Bolino. ‘Artists ought to be a bit crazy. Of course, all the people I publish know what they do. Then again, if there’s a new nazi government, they’ll probably have to go into a real mental institution after all’.

ANOTHER SHOW AT THE SAME TIME RADAR EYES

Including works by Le Dernier Cri (Marseilles, France), Xander Marro and Lief Goldberg (Providence, RI), Dutch Illustrator Zeloot, Minneapolis-based Danimal, and Seripop (Montreal), this show offers a mind-expanding aesthetic experience for all.
RADAR EYES debuted in 2008 at the Co-Prosperity Sphere (Chicago), home of the Public Media Institute. RADAR EYES will travel to Glasgow, U.K. early spring of 2010. This edition of the exhibition was made possible by NYC artist's collaborative The Space, which has been dedicated to the use of underutilized properties in the name of art since 2001.